Altium Designer has powerful 3D tools, allowing you to export a STEP model of a PCB. This is very convenient as a complete 3D model of your PCB can easily be imported into CAD programs such as Solidworks.

There is a problem when doing this with with multiple different PCBs, however. Due to file naming when Solidworks imports the STEP file, each separate PCB has a model named “Board” for example that is the model of the bare PCB. Since the assemblies for each PCB have the same part named “Board”, Solidworks will use the same bare PCB model for all the assemblies, which is clearly wrong. This problem extends to other components which have the same name such as R1, C1, etc. This import procedure applies a suffix to all components to avoid this problem, allowing successful use of multiple PCBs in one assembly.

Important: Some of these steps like restarting Solidworks may seem odd, but they must be followed EXACTLY for this to work.

The resulting assemblies for each PCB can then be used in a single Solidworks assembly without problems. The final assembly for a single PCB is shown below, with suffixes on all components: 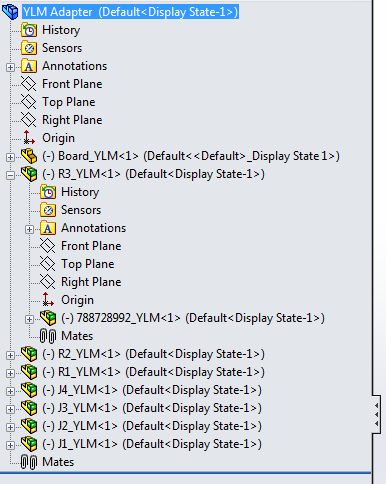